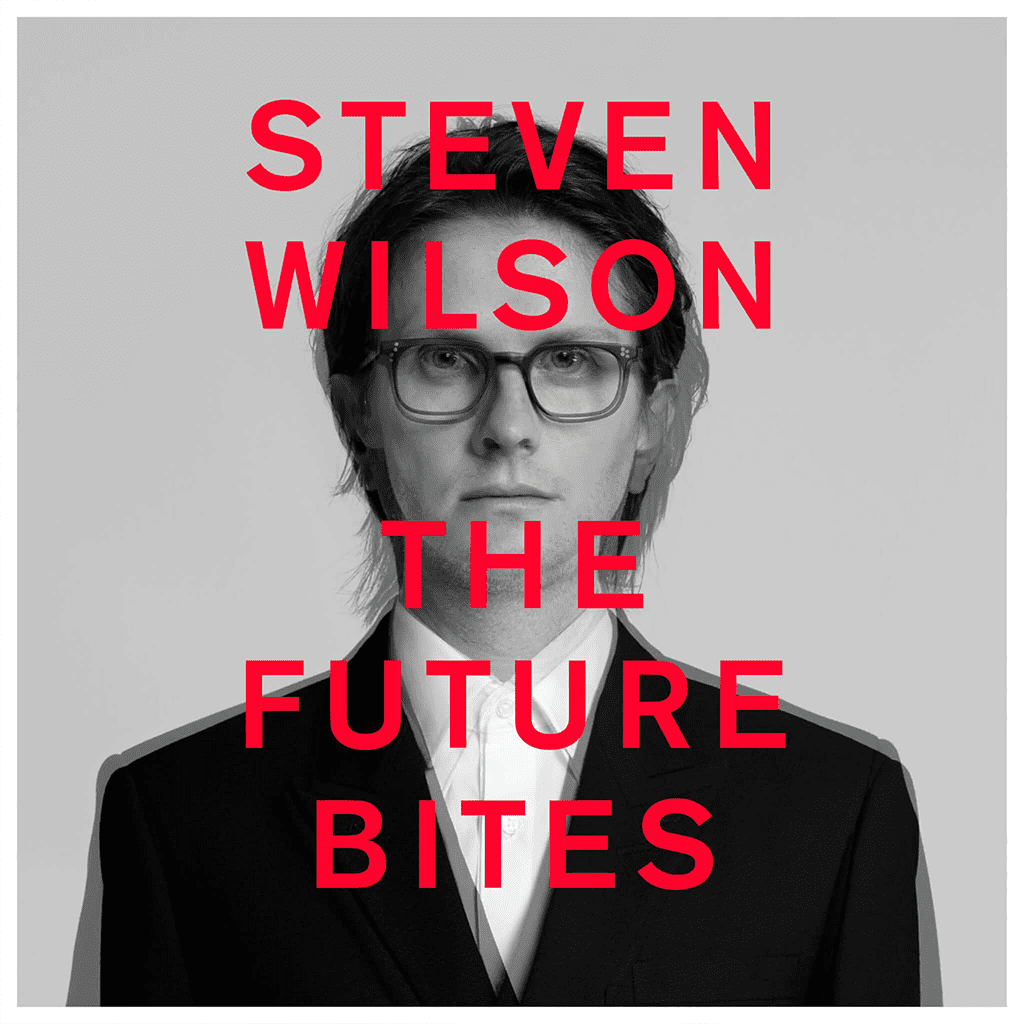 “I have never thought of myself as a generic artist. And that’s not to say that I don’t acknowledge that I have made albums have tended to be the most successful of my career. But I started in a synth group called No-Man and I spent years making ambient music as Bass Communion”
Come dire, il progressive rappresenta una parte di me, quella più acclamata, ma non mi sono mai riconosciuto soltanto in quello.

On January 29, 2021, “The Future Bites”, the sixth album of Steven Wilson’s solo career, will finally be released.

Actually, the release of this new work was originally scheduled for June 12, but it was postponed due to the Covid-19 emergency, thus forcing us to wait for seven months more and giving us, at the same time, the opportunity to better assimilate the four singles extracted from the album and already released previously:”Personal Shopper” released in March,”Eminent Sleaze” and “King Ghost”, followed by “12 Things I Forgot”, which appeared online about two months ago. “Man of the People” has recently been added to these tracks.

We could dwell at length on what this period of “digestion” of the new Wilsonian material have meant within the vast community of its fans, bringing up all the discussions, the blatant distrust, the amazement, the anxiety mixed with horror, as well as the unconditional devotion, the boundless trust, the enthusiastic expectation.. in a nutshell the diasporas that a musical horizon such as the one displayed these days by the British artist has produced: a picture that is undeniably far from certain “progressive” branding, in an absolute sense, which are now apparently outdated.

We could certainly investigate these aspects, but we will not do it here, because on closer inspection it appears as the obvious chronicle of a foretold death: seeing oneself still stuck on the “doc” label of a genre that now seems to represent an essential factor more for the public praising that for the artist himself. It was abundantly clear with the release of “To The Bone” that Wilson had abandoned the claustrophobic and anxious atmosphere of “Insurgentes” or the orchestral epicness of “Grace for Drowning“, just to mention something from the dawn of his solo career: the breaking up with the past had by now revealed itself in the tracks of the 2017 album and, whether it has been accepted or not, it was foreseeable that from that moment on we would need to forget about certain sounds – but our memory retained them-.

“I have never thought of myself as a generic artist. And that’s not to say that I don’t acknowledge that I have made albums have tended to be the most successful of my career. But I started in a synth group called No-Man and I spent years making ambient music as Bass Communion “: that is to say, progressive represents a part of me, the most acclaimed one, but I never recognized myself only in that.

This is the perspective from which we prefer to analyze what we are invited to listen to, and which seems to us the most respectful towards a figure who is above all an artist, rather than an instrumentalist; an innovator, before being a “genius of modern prog”; an embodied lover of sound and its definition, before being a composer. An eclectic personality who has repeatedly admitted to admire, above all, the very father of eclecticism, a certain Prince.

Besides, responding to the expectations of colleagues or of the audience has never been an object of interest for the former leader of Porcupine Tree: if it were not so, probably our much-missed band would still be alive.

It is a question of identity and identification. And this is, in certain ways, also the theme of “The Future Bites”, a product that if observed from this point of view, free from expectations or prejudices, appears to be of appreciable and captivating workmanship, and it appears to be so the more you listen to it.

Let us come then to this new album, which represents the electronic turning point in the artist’s career in a pop key, but not only that.

Faithful to the definition of a basic concept, the topic that Wilson unravels in the nine tracks of his latest work is the hidden danger coming from the era of digitalization and unbridled consumerism, an era that risks tto swallow us up and to cancel us in the dimension of not being, mainly because of the persuasive and directional nature of social media. The error is not the Internet itself, says the British artist, but using it on a purely narcissistic level.

All this translates into the dense and powerful electronic cloud of “The Future Bites”, in which Wilson’s proverbial darkness seems to be shaken by artificial flares of choirs, falsettos and apparently merry dancing fluctuations, while actually it does nothing but sadistically disguise itself as irony and black comedy.

This is the general mood of the album, which begins, however, with something absolutely unexpected: a strongly evocative synth, Radiohead-style, reaches from remote places the intro of “Unself”, a lyric pill of just over a minute, that is able to to embody the meaning of the entire playlist. With a strong suspension and a few, incisive sentences, everything here is beginning and ending. Wilson’s soul is already revealed in the intro of the work, leaving us anxious for what will follow.

The development of the plot is not far behind, indeed “Self” bursts out overwhelmingly, in a diametrically opposite way to “Unself”: cautious, almost contracted and visceral the first, powerful and assaulting the second, with its typically ’80s electro dance and the unveiling of choirs that were already experienced in “Permanating” from the previous album.

The high definition of sound, resulting from the successful collaboration with David Kosten, is even more evident in the subsequent track “King Ghost”, whose hypnotic and enveloping bass intro, accompanied by the percussion of Jason Cooper – drummer of The Cure-, together with the clever use of Wilson’s voice, leads to the rise of an exasperated and dead-end drama: an atmosphere that seems to expand, but remains there, contained, almost oppressive, producing a toxic and dreamlike effect at the same time, similar to a drug addiction journey: “You can wash away the dirt / but you can’t wash away the failure”.

“King ghost” is undoubtedly a very high quality song, one of Wilson’s favorites: not surprisingly, he’s called Jess Cope to make the video clip, so as to give this track an even greater awesomeness.

Proceeding, we meet “12 Things I forgot”, certainly the most catchy track of the album, in which the guitar is again the protagonist and the melodic line becomes more regular, gently reclining us back on the ground after the take-off without a parachute of “King Ghost”.

In classic Wilsonian style, after a pausing moment from the extreme sensations previously raised, the dominant mood reappears with “Eminent Sleaze”: between clapping hands and a widespread Floydian echo, Mr. Wilson makes space in the role of the most powerful businessman in the world, or rather the one which, beating the competition, remains as the only human being, in an extreme “limited edition”. The grotesque rendering of the album’s leitmotiv reaches its peak here, underlined by the phrasing of a drawn guitar, various vocal registers and a lot of 80s inspiration.

Once again we seem to be finding Pink Floyd reminiscences in “Man of The People”, a neat and clean track, which blows currents of fresh air between the densities of the bass, solid bricks in this once again electronic architecture. The closing of the song and the ending bring to mind the final chord of the title track “To The Bone” with the exact same intention.

The finding of a “self-centering” system, which puts us at risk of making us obsessively linked to images sent back every day from a screen, or to the need for spasmodic and useless purchases dictated solely by a worrying form of addiction, finds full expression in “Personal Shopper”: first single from the album, it certainly retains the length from progressive rock, being almost ten minutes of compendium of genres, ranging from Donna Summer to synth pop, all supported by an incessant electro dance that is able to give space to the deliberately impersonal voice of Elton John, listing a list of products that are absolutely superfluous but necessary to enhance the cult of the self.

A rather long time for a listening that can be actually drunk in one sip and in an extremely pleasant way, given the colorful structure that characterizes it and the bass with its indisputable and highly articulated groove.

Proceeding towards the tail tracks of the album we find “Follower”, an almost obvious reference to the fleeting panorama of influencers and social media, that are oriented towards the pursuit of gratification and satisfaction of one’s exhibitionism in real time, albeit for a few moments.

The rhythm section launched in full speed, the keyboard effects that in a succession of waves do reach and envelop the instruments, Wilson’s voice and the guitar that flank the fugue, it all contributes to the idea of ​​this uninterrupted and superficial motion. All this is, however, a bit excessive to listen to: the intro promised a different idea compared to ​​the development of the piece, which unfortunately almost seems to get lost in the chaos.

“Count Of Unease”, on the other hand, does not disappoint and confirms the tradition of an intensely lyrical choice of the artist at the end of the album: an extremely delicate song, both in the vocal management and in the instrumental performance, envelops everything in its inner cape, the air subsides, the frenetic rhythm of “Follower” ceases, leaving room enough for a fragile and faint shadow of the true self.

A voluntary but biting surrender, that of “The Raven That Refused To Sing”; dramatically forced, that of “Happy Returns”; desperate and hopeful at the same time, that of “Song of Unborn”; almost allowed to emerge from a fund of ineluctability, this of “Count Of Unease”, which caressingly leads us to the end of “The Future Bites”, to let the emotions subside.

With “The Future Bites” Steven Wilson shows his intention to cut ties with nostalgia and the sound of the past, to turn to a contemporaneity that is interpreted in an absolutely original way.

The single extracts, at first unsettling, have found a new meaning within the album, almost as a result of a strange alchemy, which is able to achieve an overall coherence and an almost perfect dynamic listening, despite that fact that -we have to admit – the inclusion of an indefinite quantity of choirs and voices of various types may appear rather redundant.

The excellent quality of the production is a pleasure for the ears.

Finally, the immersion into the abyss of one’s interiority is guaranteed, albeit with a different technical register than the one we were used to.